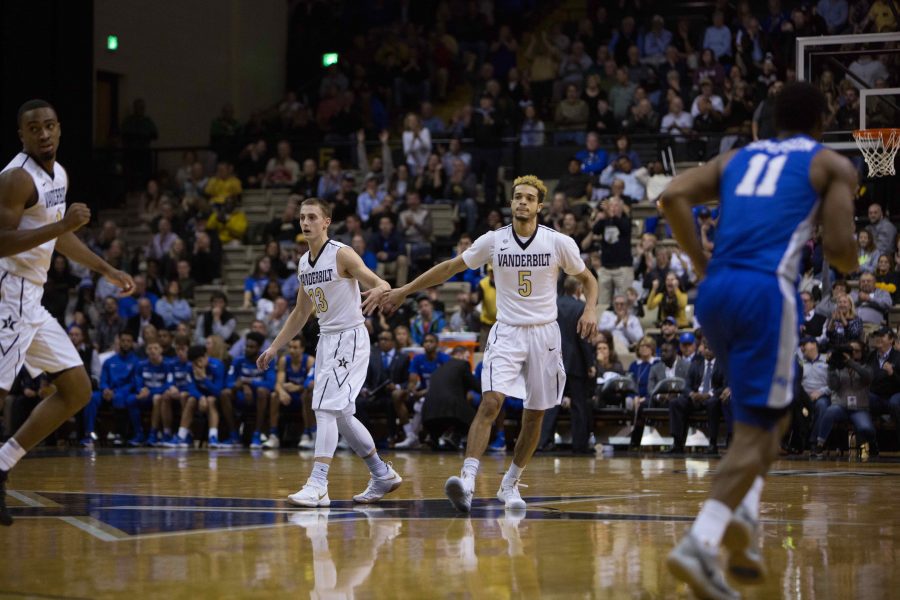 Matthew Fisher-Davis connects on a three pointer to make the game close against MTSU on Wednesday, December 06, 2017. (Photo by Hunter Long)

Vanderbilt seniors led the Commodores to a solid 81-48 victory over Houston Baptist last night. The win adds a much-needed notch in the “W” column and more than a little confidence to the 4-7 Commodores before they enter conference play.

Following a difficult loss to MTSU, Vanderbilt had a ten-day break from games which the team used to build confidence shooting, restructure the offense, and of course, take final exams. The new “small game” arrangement gave Joe Toye and Payton Willis more floor time in order to give the offense more speed. It seemed to have an immediate impact, allowing Vanderbilt to jump to an impressive 13-0 first-half lead against Arizona State.

The same lineup was introduced at the beginning of the game against Houston Baptist. Vanderbilt jumped out ahead to an 8-2 lead early, but a series of fouls and turnovers allowed Houston Baptist to tie the game up 8-8 just five minutes into the half. Senior Jeff Roberson, who led Vanderbilt in rebounds, commented that defense helped keep the team in the game through the early minutes of confusion.

The team was able to break the Houston Baptist press by substituting Djery Baptiste into the game, but Vanderbilt maintained an uncomfortable 15-10 lead until they called a timeout around the seven-minute mark. Coach Drew would later complement his seniors on being “more vocal in the huddle than they’ve been all season.” The timeout was a turning point in the game, and the seniors were able to execute.

Matthew-Fisher Davis and Riley LaChance went on multiple unanswered runs of three-point shots. Both teams attempted the same number of three-pointers in the first half, but Vanderbilt converted six to Houston Baptist’s zero. Fisher-Davis would lengthen the Commodore’s lead to 34-17 on a three-point shot at the end of the half.

Shooting has traditionally been one of Vanderbilt’s strong suit. But Fisher-Davis, like the rest of the team, has struggled with consistency. For instance, after putting on a brilliant 20 plus-point performance against USC, the senior guard had a cold game against Virginia.

“We’ve been shooting a lot in practice, and after practice on our own,” Fisher-Davis said, “because the coaches have told us the only way to get out it is to keep shooting.”

Although he scored an impressive 17 points against HBU, Coach Drew used the Arizona St. game to emphasize how Fischer-Davis was growing into a team leader and well-rounded player.

“Matt went 1-10,” the coach said, “but he was able to contribute in other ways. He was diving after balls, he took a charge, and was the second highest rebounder on the team. So I told him when we watched the film: ‘your shooting doesn’t define you.’”

The second half of the HBU game saw Vanderbilt run away with a lead as the score and run time became inflated with bonus free-throws. Freshman Maxwell Ellis took advantage of the extra time, putting on a 12-point performance capped by a dunk with less than a minute left in the game.