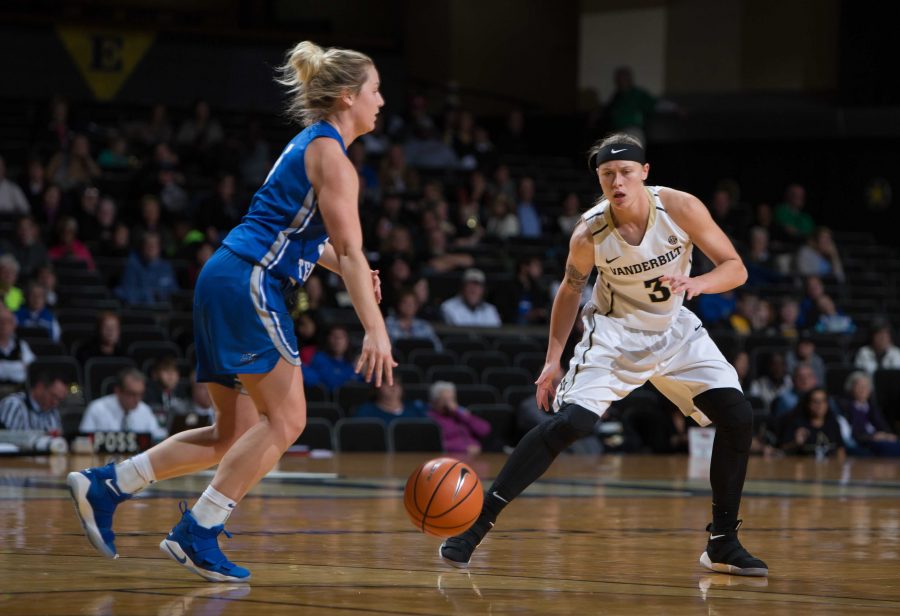 The Vanderbilt Women's basketball team faces off against MTSU on Friday, November 10, 2017. Photo by Hunter Long.

The Vanderbilt Women’s Basketball team lost 83-72 to NC State in a game that was closer than the final score might indicate.

The loss stretched their losing streak to three games. With the 19th-strongest schedule in the NCAA, the Commodores are no strangers to challenging opponents. However, because of turnover troubles, they were especially vulnerable to a NC State team who played a physical game on the inside.

Still, Vanderbilt was able to hang around for an exciting game that turned historic when Senior Rachel Bell scored her 1,000th point of her career. The guard from Cumberland Furnace, TN reached the career milestone in spectacular fashion, scoring nine points and two tying baskets over the course of the game.

“I’m excited for her,” head coach Stephanie White said of Bell. “And I think she’s really flourished as far as taking advantage of opportunities.”

NC State got out to an early lead, leading the commodores 17-9 with less than five minutes to go in the first quarter. But Erin Whalen’s three pointer, followed by two unanswered three’s from Cierra Walker and Bell, put the Commodores even with NC State at the end of the first.

In the second quarter, pressure from NC State’s defense forced Vanderbilt to make mistakes. The Wolfpack were able to capitalize on turnovers, scoring about 1/3 of their points in the quarter after recovering the ball. The Wolfpack went on a 7-0 run led by senior guard Niara Leslie, but otherwise the Commodores were able to stop the bleeding to keep the score at 36-32 at the half.

Through the third quarter, NC State continued to lead the Commodores by several baskets. A Commodore run around the six-minute mark culminated in game-tying hook right under the basket from sophomore Kayla Overbeck, but after the lead briefly traded hands, it was taken back by NC State. The offenses of both teams exploded in the fourth quarter as players began to tire. NC State was able to run away with the game by winning the shootout, scoring seven more points that the Commodores in the quarter to make the final score of 83-72.

Despite the score becoming further out of reach, the Vanderbilt squad was able to celebrate some positive moments in the last minutes.

According to Coach White, the team “did a better job on offensive rebounds in the second half than we did in the first.” Bell’s record basket put the Commodores within four points, but it came during the final seconds of the game.

The Commodores will remain at home to face local rivals Lipscomb and Belmont before the new year.