Sam Loy: The anatomy of a 5-star punter 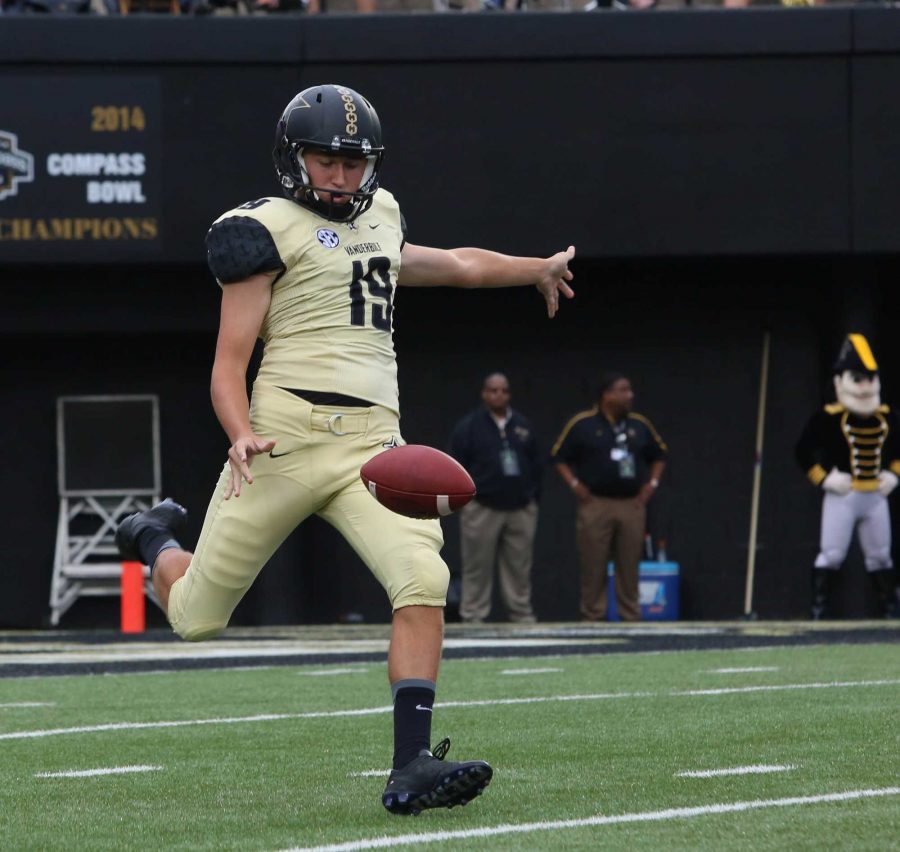 Film of an NFL punter rarely wins over five-star recruits, but when Michigan coach Jim Harbaugh made a late push for a Vanderbilt commit this past January, that’s what it took to keep Sam Loy committed to the Commodores.

Newly hired Vanderbilt special teams coordinator Jeff Genyk showed Loy film of Tampa Bay Buccaneers punter Bryan Anger, who played for Genyk at Cal and is one of Loy’s punting idols. A California native, Loy reaffirmed his commitment to Vanderbilt by turning down Harbaugh and a spot at Michigan’s Hollywood-style signing day featuring big names such as Tom Brady, Derek Jeter and Migos.

Seven months later, Loy is the Commodores’ starting punter and is living up to his five-star rating from Kornblue Kicking as the nation’s top high school punter in the class of 2016. Through five games, the freshman ranks sixth of 13 qualified players in the SEC with 42.6 yards per punt. Among the four freshman punters in the SEC, Loy ranks first in the same category.

But how does one become a five-star punter?

Loy attained his high ranking by attending kicking camps, developing consistency and becoming a dual-threat punter comfortable with both American and Australian styles.

In the spring of his junior year, Loy attended his first of three camps hosted by Kornblue Kicking, a national special teams service that trains and rates high school kickers, punters and long snappers. Founded in 2007 by former Michigan and Arena Football kicker Brandon Kornblue, the kicking academy publishes an annual ranking of high school specialists.

“From an athletic standpoint, being a kicker or punter is such a unique position and such a unique role compared to the rest of a football team,” Kornblue said. “College coaches have a tough time making those evaluations, whereas they are very confident that they can evaluate quarterbacks, receivers and linemen. But, when it comes to kickers, it’s such a unique position that they’ll usually look for help.”

Loy received a five-star rating as the top punter in Kornblue’s 2016 Fab 50 punter rankings, meaning Kornblue saw him as an immediate college starter. Vanderbilt’s coaching staff used these rankings while it recruited and ultimately offered Loy a scholarship in November 2015.

“It’s cool to be ranked No. 1,” Loy said. “I definitely feel happy about that. I put a lot of work into it so it’s nice to get that showing for the effort I put in.”

Kornblue likens his rankings to a standard college football poll, as “an opinion based on somebody’s body of work.” He judges high school punters based off a combination of quantifiable traits, like hang time, distance and technique and intangibles such as punting under pressure, maturity and kicking in different settings.

A big reason for Loy’s high ranking and early college success is his mastery of two punting techniques. The traditional American punt, or nose-over technique, generates distance and hang time. This style is the norm in college and professional football, and is how the average person would punt a football.

Loy fine-tuned his Australian-style punt during multiple visits with kicking coach Nathan Chapman in Melbourne. Often accompanied by a rollout, the punter kicks the ball with backspin so it dies once it hits the ground, with the goal of pinning opponents inside the 20 yard line. Loy deploys the Aussie punt when the line of scrimmage is at or beyond midfield.

“What’s very uncommon is for somebody to be able to do both styles well,” Kornblue said. “There are very few guys who can do both. That’s what’s so unique about Sam, and one of the reasons why he earned our No. 1 spot.”

Loy’s rare versatility earned him quick respect during summer ball from Genyk, a renowned special teams mind tasked with fixing the Commodores’ poor punting results in 2015, when they struggled to boot the ball deep and allowed more punt return yards than any other FBS team.

“Our system is built to handle a punter that can do an American-style punt, along with moving the pocket so it changes the block point for the opponent. It’s also more challenging for the returner,” Coach Genyk said. “With that system being in place, having a versatile punter is critical.”

Despite Loy’s fit in the scheme, he was not Vanderbilt’s starting punter on opening night against South Carolina. Junior walk-on Reid Nelson won what Genyk called “a competitive battle” between two players who had never played a collegiate down. After Nelson sent a 21-yarder straight out of bounds inside Vanderbilt territory early in the second quarter, the coaching staff made the switch after just two punts. Loy came on later in the quarter, punting six times in the 13-10 loss.

A month later, the job remains his.

“We really felt with the platform that we gave Reid Nelson that we really should expect high quality punts the vast majority of the time,” Genyk said. “When that didn’t transpire, we decided to go with Sam.”

Through five games, Loy is averaging 42.6 yards per kick on 29 punts, dropping 11 balls inside the 20 yard line and topping 50 yards on seven occasions.

“Sam has really provided us with a consistent leg, somebody who’s going to consistently flip the field for us, somebody who gives us a chance to play on a long field,” Vanderbilt head coach Derek Mason said after a loss at Georgia Tech on September 17, in which Loy punted eight times. “He’s gotten us out of some situations and given our defense a chance to play on some long fields.”

Loy’s strong transition from high school to college continues into his second month as Vanderbilt’s punter, fulfilling his dreams of kicking for a big-time school.

“When he said Vanderbilt, it was Vanderbilt all the way,” said John Byszewski, one of Loy’s coaches at Santa Margarita High School.

Not even Jim Harbaugh, Tom Brady and Migos could change that.