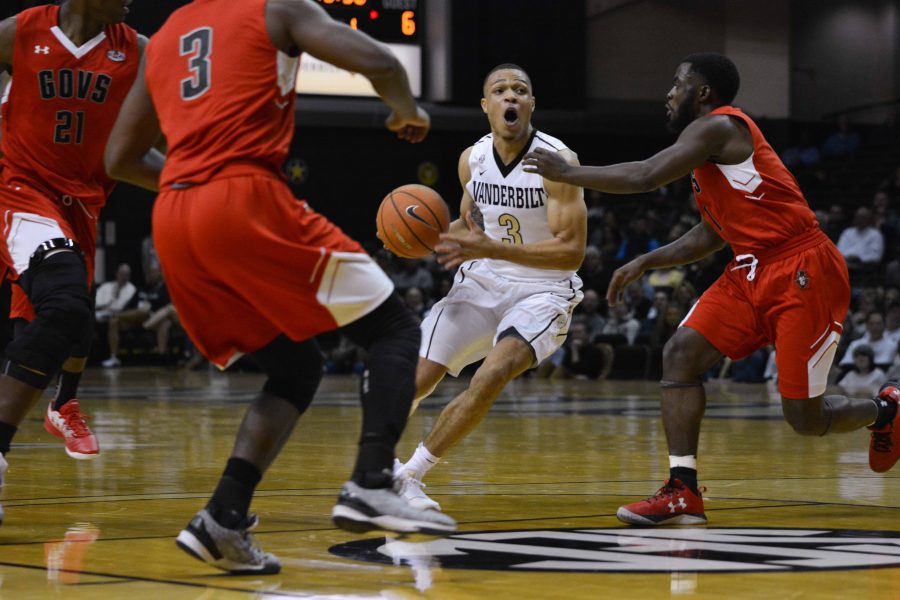 Heavily favored to win, the Vanderbilt Commodores took care of business tonight behind a dominant presence on the glass and capitalizing off of the Austin Peay Governors’ turnovers, securing a 73-54 victory.

They exhibited some sluggish play, with an especially difficult start to the second half. Nevertheless the Commodores did enough to build a comfortable lead by the four-minute minute mark.

Vanderbilt found its success scoring 18 points off of 17 turnovers, and securing 16 offensive boards. Their offensive production came through a balanced attack, with Clevon Brown as a surprising major contributor scoring 13 points on an efficient 6 for 11 day from the field. Freshman Saben Lee also flashed his lead guard skills with seven assists.

However, Brown may not see too much extended time at center down the road, as he’s got the skills to play at forward.

“A lot will matter how the game’s going,” Drew said. “The nice thing is, he’s versatile. He will go back and forth depending on matchups. I thought he did a nice job.”

The first couple minutes sparked fireworks with both teams trading threes, including Roberson’s three that set Vanderbilt’s record for 1000 consecutive games with a made three-pointer and LaChance’s three following that in his 90th career start with Vanderbilt.

However, the Commodores struggled with foul trouble early, in particular centers Djery Baptiste and Ejike Obinna, both picking up two fouls after a couple minutes of play each.

Playing an aggressive style of defense, a couple of breakdowns in communication allowed Austin Peay to stay in the game. The trapping style of defense led to open threes from Austin Peay, but they were unable to make the Commodores pay, shooting only 3-10 on threes in the first half.

Offensively, the Commodores were unable to establish any rhythm at first, but Brown provided a spark off the bench, staying active in the paint cleaning up easy baskets, and even scoring a couple nice buckets in the post. Obinna and Baptiste joined in on the act down low, with Obinna grabbing an offensive board, and Baptiste slamming home a putback dunk.

With the mixed start on offense and defense, thirteen minutes in, the game was still a very back and forth affair, with neither side going on a run of more than five points at once. The Governors went to a full-court press to try and apply additional pressure.

However, late in the first half, the Commodores settled down and began to take control, with three forced turnovers leading to a Brown dunk, a Payton Willis three, and an emphatic Lee poster dunk to cap it off.

The final seven minutes saw Vanderbilt go on a 18-9 run, taking a strong 13-point lead into halftime, and if not for impressive mid-range shot making from the Governors, the lead would have been extended further.

Vanderbilt played sluggishly in the opening minutes of the second half, struggling with foul trouble, shooting only 4-15 on threes, and turning the ball over ten times. Unable to force turnovers, their half-court offense struggled to get going.

LaChance noted that the team may have had “nerves a little bit at the beginning too, lot of guys’ first college game, first time all playing together,” and Roberson pointed to “defense and really getting stops” as important factors in the game.

The Governors pulled within seven with 11:42 left, but minutes later, the Commodores scored on three straight possessions with a Joe Toye three, a Brown three-point play, and Riley LaChance three. They were unable to extend the lead however, as they allowed the Governors to respond each time with baskets.

The offensive run happened after Brown subbed in for Baptiste, who had to sit with four fouls. This lineup with neither Baptiste nor Obinna, the traditional centers, saw much more success in the halfcourt offense, and was able to get just enough stops on defense for Vanderbilt to extend their lead to 16 with 4 minutes left.

Moving forward, Coach Drew spoke about how they can improve against tougher talent.

“It’ll be nice to get [Fisher-Davis] back,” he said. “He’ll give us a little more size at the wing, and obviously with his leadership, his scoring ability, it’ll be big for us…we don’t have Luke Kornet, and so we’re going to have to find ways to use our size as an advantage”

Vanderbilt will look to build off this performance when they take on Belmont next Monday, November 13th, at 6:30pm.