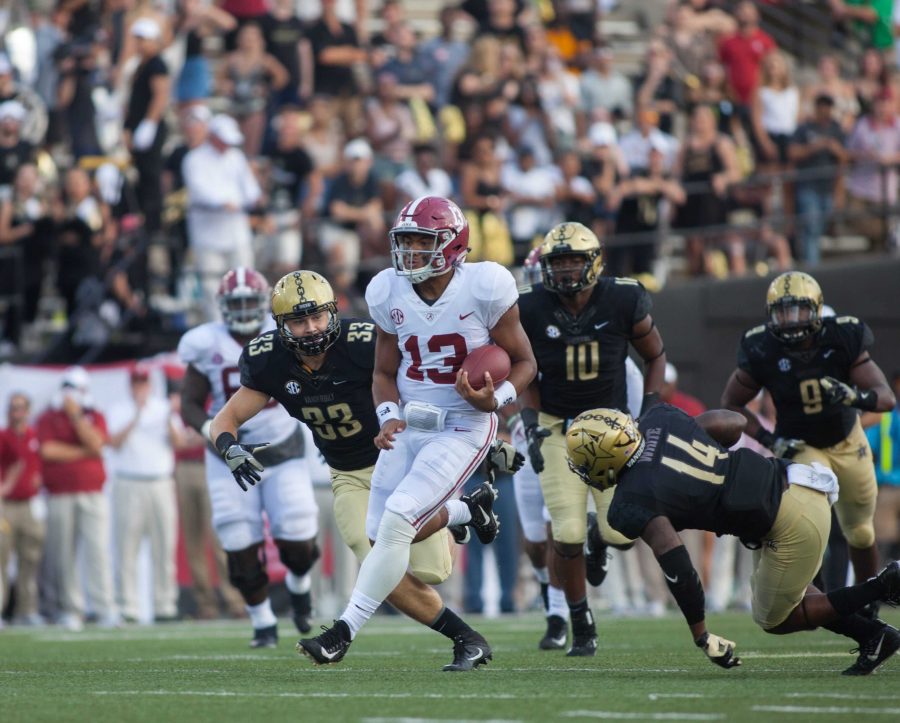 Another week has come and gone, and the SEC is still pretty much a two-horse race. Anything can happen on any given Saturday, though.

Here are your power rankings for Week 10.

Coming off their bye week, Alabama still boasts an undefeated, 8-0 record, good enough for the College Football Playoff number one spo—Wait, what?

This just in, Alabama isn’t number one in the nation. The Crimson Tide may still second in the nation, but they have yet to achieve a big win like Georgia has. This week, they have the chance to do just that, as they host the 19th-ranked LSU Tigers. Look for Alabama to assert their dominance this weekend, as they will do all but punch in that ticket for the #1 seed in the College Football Playoff.
2. Georgia
Sorry, Bulldogs. You may be first in the nation according to the College Football Playoff rankings, but you’re still second in our power rankings. Powerhouses like Alabama don’t come around very often, so the Bulldogs will have to wait until they get their chance to shine–likely in the SEC Championship–and dethrone Alabama. For now, we can expect Georgia to take down South Carolina this upcoming week after shellacking Florida by a score of 42-7 in their previous game.
3. Auburn
Auburn is coming off a bye week and are ranked 14th in the nation. Auburn beat Arkansas by a score of 52-20 in their last game, so they are definitely favored going into their upcoming game against the Aggies of Texas A&M. Perhaps it’s time for Auburn to look past the Aggies into Week 11, as they will be hosting the Georgia Bulldogs. If they want to make a statement, they need to give Georgia a close ballgame.
4. LSU
LSU, it’s your time to shine. Don’t be rattled by the SEC Nation set: that’s how the Commodores spilled the beans against the Crimson Tide (at least that’s what we’ll blame it on).

LSU comes into Tuscaloosa ranked 19th in the nation and should be fully rested after their bye week. We wish the best of luck to Derrius Guice; the Tigers will have to rely heavily on Guice to perform like his normal self, which is nearly impossible to do against a flawless Alabama defense.
5. Mississippi State
Mississippi State got off to a hot start this season, but after cooling down, they’re back on a three-game win streak. Thankfully for MSU fans, they’re finding their groove again, and will surely qualify for a bowl game if they can keep this up.

Quarterback Nick Fitzgerald may not have had his finest game on paper, but his 141 passing yards and two touchdowns were enough to get the job done. Fitzgerald’s presence on the ground was also huge for the Bulldogs–in addition to his passing stats, he led the team in rushing with a whopping 105 yards and a touchdown on just 18 carries. Mississippi State hosts UMass this weekend, so they basically have a free win. At least one would think…looking at you, Troy and LSU.
6. South Carolina
The key to South Carolina’s win against Vanderbilt last weekend? Quarterback Jake Bentley. Much like Nick Fitzgerald of Mississippi State, Bentley showed the world he can do it all, as he threw for 174 yards and a touchdown, but more impressively, ran for 47 yards and two touchdowns.

The South Carolina defense didn’t let Vanderbilt claw too far back into the game, but it must’ve been easy to predict their gameplan, as Kyle Shurmur threw the ball a whopping 49 times. Unfortunately, South Carolina faces their toughest test of the season this week, as they play the Georgia Bulldogs. They still have plenty to play for, so Gamecock fans better hope that this team can bounce back from the inevitable loss to Georgia this week.
7. Texas A&M
Technically, the Aggies are still in play for a bowl game. Their game against Mississippi State could’ve been a huge win for them, but the Bulldogs had no problem against the Aggies.

The Aggies can’t seem to catch a break: after losing quarterback Nick Starkel to a broken ankle in week one, backup Kellen Mond was sidelined after he took a big hit late in the game. The only positive note is that Starkel was healthy enough to replace Mond after his injury. The Aggies face a tough task home vs. Auburn this week; the A&M fans will surely have to wait another week to get that coveted sixth win, making them bowl eligible.
8. Kentucky
Despite wide receiver Lynn Bowden Jr. only having 10 less yards passing than starting quarterback Stephen Johnson, the Wildcats still managed to come out on top of the game against Tennessee 29-26. Now standing at 6-2, Kentucky has surprised many mostly thanks to underrated running back Benny Snell Jr. With bowl game hopes in mind, it is vital that Kentucky finish the season strong, as they play 3 SEC opponents in a row including #1 Georgia which will prove to be quite the test of Kentucky’s strength and mental toughness.
9. Arkansas
Breaking their three-game losing streak and getting their first SEC win of the season of the year was incredibly big for Arkansas, who are looking to get a bowl game bid to cap off their underwhelming season thus far.

Despite the fact that they did it in game-winning fashion, freshman quarterback Cole Kelley had a huge game with four total touchdowns and proved that he could be their savior going forward. They’ll need his success to continue as, after an easy matchup at home against Coastal Carolina, they come up against two ranked SEC teams in LSU and MIssissippi State. Chances are, in order to make a bowl game, they’ll need to rally and win one of those.
10. Florida
To be fair, Florida shouldn’t have expected much against Georgia, who have risen to the #1 spot in the College Football playoff rankings. The Bulldogs came out flying, scoring 21 in the first quarter and Florida just couldn’t come back. Other than a “garbage-time” score, the Gator offense just couldn’t get anything going.

Despite the high aspirations for success, Florida has proved time and time again that their #17 preseason ranking was completely undeserved as, after this loss, they fall to 3-4 on the season.
11. Mizzou
Under almost any other circumstances, a two-game winning streak for Missouri would be an amazing accomplishment for a squad that has been awful this whole year.

However, their two wins were against two programs not known at all for their football success in Idaho and UConn. Since neither Idaho or UConn is particularly good on the offensive side of the ball, their defense wasn’t exposed nearly as much as they had been throughout the year. However, they should come back down to Earth as they play an SEC team in Florida next week at home.
12. Ole Miss
After losing quarterback Shea Patterson for the year last week, it seemed as if Ole Miss’s season was all but over (even though there wasn’t much to look forward to in the first place because of their postseason ban). Despite that, they came out strong against fellow SEC opponent Arkansas this past weekend.

Quarterback Jordan Ta’amu played well with 368 yards in Patterson’s place and added 76 yards and two touchdowns on the ground. Despite his success, Ole Miss couldn’t capitalize, as they allowed Arkansas to go down the field and kick a game-winning field goal with four seconds left. This game was a dagger for Ole Miss who are just attempting to play for pride at this point, as instead of being .500, they fall to 3-5.
13. Vanderbilt
We said it last week and we’ll say it again: it seems like an eternity ago that Vanderbilt beat #18 Kansas State and started the season 3-0.

Well, now they have lost five games in a row, losing last two to unranked opponents. Quarterback Kyle Shurmur has been playing incredibly well, with 333 passing yards and four touchdowns last week against South Carolina, but the rest of the team just can’t seem to get it together. Since allowing just seven points in Week Three to Kansas State, their defense has surrendered a whopping 47.4 points per game in their last five losses. That type of defensive play will need to be fixed as they go into their final four games as they seek to make a bowl game.
14. Yu Darvish in Game 7 of the World Series
Despite giving up four Earned Runs and five Runs in just 1.2 innings, the fact that he was able to get five batters out earned him a higher spot than the pitiful Tennessee Football team.
15. Tennessee
Well, at least Tennessee got close to winning this week against Kentucky, but a fourth-quarter collapse cost them their first potential SEC win of the season.

However, it wasn’t all negatives for the Vols, as freshman running back Ty Chandler proved that he could be their running back for the future with 120 yards rushing and two touchdowns. With that being said, the future clearly isn’t now for Tennessee. Somehow Butch Jones still has his job, and until the Tennessee athletic department wakes up and realizes he isn’t going to lead their squad to wins and a bowl game, we don’t expect them to change their losing ways.