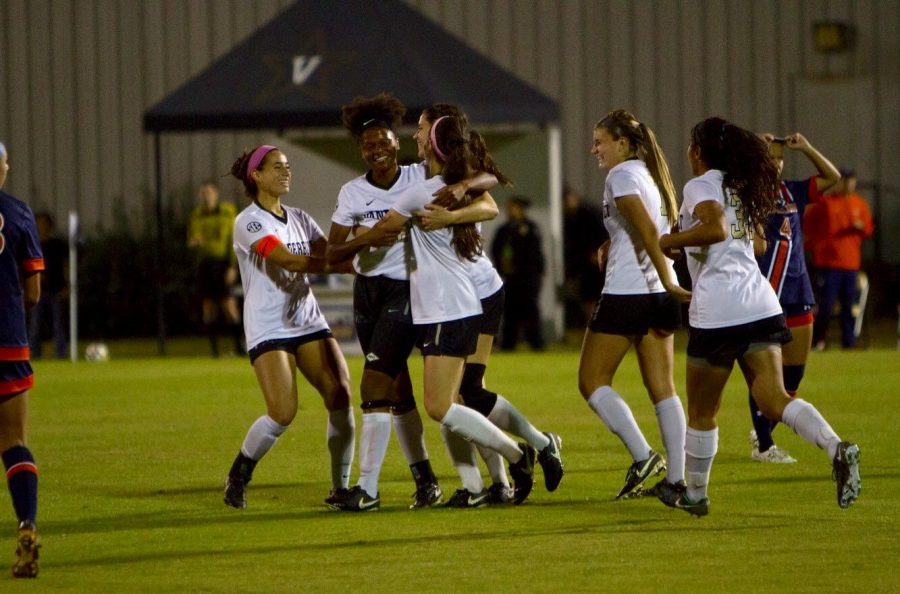 The Vanderbilt Commodores finished off a strong regular season with a resounding 2-1 victory over Auburn on Thursday night, earning themselves the fourth seed in the SEC Tournament and adding yet another impressive win to their NCAA tournament resume.

It was Senior Night and the first goal was, fittingly, an all-senior effort, with Lydia Simmons launching a perfect shot into the upper right corner of the net from 25 yards out assisted by Simone Charley. Vanderbilt’s second score came from a Jackie Welch shot from the top of the six with less than a minute left in the first half.

Aside from the two Vanderbilt scores, the first half was a mostly uneventful one. The Tigers came out of the gates in the first ten minutes controlling possession but failed to create any real opportunities. Auburn took only three shots in the first half, and Vanderbilt goalkeeper Kaitlyn Fahrner wasn’t forced to make any saves.

The Commodores opened the game struggling to hold onto the ball. After the first ten minutes, possession began to level out, but Vanderbilt still couldn’t penetrate well in the attacking third.

They didn’t need to. Thirteen minutes into the first half, Charley laid the ball off the Simmons several yards beyond the 18-yard box. Simmons took a touch and then struck a bending line drive into the upper 90, finding the back of the net to give the Commodores an early lead. The goal was Simmons’ second of the season.

“As soon as I saw Lydia setting it up to hit it on her left foot, honestly, I thought it was going to be a goal,” head coach Darren Ambrose said. “They gave her enough time, and when you give her enough time 25 yards out, it’s gonna hit the frame.”

Lydia Simmons with what would be @UEFA goal of the week for @vucommodores against Auburn on @SECNetwork #SCTop10! pic.twitter.com/vZJVnzwQsz

Auburn had a few opportunities late in the first half, including a nice give-and-go between Bri Folds and Kristen Dodson at the top of the six that went wide right. In the final minute, however, Nia Dorsey slipped a ball into the top of the six for Welch, who hit it into the back of the net to give the Commodores a 2-0 lead heading into halftime.

The Tigers opened the second half aggressively, putting pressure on the Vanderbilt defense and keeping them locked in their own half. Several Vanderbilt fouls in the attacking third gave the Tigers plenty of set piece opportunities early.

The Commodores held onto the shutout until the 73rd minute, when Rocio Sanders launched her own upper-90 strike from distance to cut the Vandy lead to 1.

Following the the score, Auburn continued to push numbers up. In the final fifteen minutes, the ball remained mostly in Vanderbilt’s defensive half. Despite the pressure, few opportunities of substance were created for the Tigers, who always seemed one pass or touch away from real chances.

“We’re up a goal, generally speaking, we don’t lose. I think that’s a mentality now that we have that has formed through the course of this season,” Ambrose said.

The Commodores weathered the storm and took home an emphatic victory over a top-20 RPI team to improve their case for making the NCAA tournament.

The win capped off an impressive season for the Commodores, who finish the season with a record of 11-6-1 (6-3-1 SEC) and a top-four seed in the conference. That’s a vast improvement from the Commodores’ 4-12-3 overall record just four years ago in 2013.

“I’m almost at a loss for words,” an emotional Ambrose said after the match. “I’m ecstatic for [the seniors], especially Tina, Lydia, and Simone because when I came here in January of 2015, they were desperate to be successful. They wanted to win. They wanted to know how to win.”

“And it’s through them and because of them that we’re standing here tonight where we are. I mean, they’ve led the charge, they’ve not only contributed on the field and in their own way, they’ve gone about bringing this program into where it is.”

The Commodores have a first-round bye in the SEC tournament and will open on Tuesday with a rematch against No. 5 seed Tennessee.