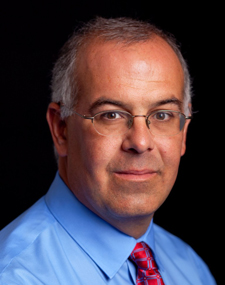 New York Times columnist and bestselling author David Brooks took the time to sit down with the Hustler to discuss his views on the day’s most pressing social, political and cultural issues before his talk with Chancellor Nicholas Zeppos and Visiting Distinguished Professor Jon Meacham on Sept. 22. Brooks, a distinguished columnist and visiting Professor of Public Policy and Philosophy at Duke University and Yale University, has more than three decades of experience covering media, culture, international affairs and American politics.

David Brooks: I discovered I wanted to (write) at age seven…I didn’t know if I wanted to be a novelist or a playwright. I was a humor columnist for a while at school, but I realized that the great thing about journalism is that you get to go out and tell stories. So, my first job was a police reporter in Chicago, so I went out and met crazy people. I covered a lot of dumb criminals. I covered a guy that decided to hold up a fast food restaurant, but he held up the one where he worked. So they all said, John, we know you. What are you doing? Since then, I have gotten to go around the world. Especially when I was a foreign correspondent. I essentially got to meet all the world leaders. Writing also fit my personality. Some people want to be the ones leading change, and some people are off on the side writing about it, so I’m more of an off-on-the-side guy than I am an organizer or leader.

VH: What was your biggest takeaway from working at the National Review with William F. Buckley?

DB: Everyone has this weird freakish break in their life. I was working on the school paper, and I wrote a column about what a name-dropping-blow-hard William F. Buckley was. He gave a talk and said, David Brooks, if you are in the audience, I want to give you a job. Three years later I called him and asked if the offer still stood, and he said yes, so I went from police reporting in Chicago to his Park Avenue apartment in New York. He was a real mentor. He invited me to concerts, took me out sailing and then he taught me how to edit. I learned about editing and the rhythm of the news. What do people want to talk about? There is a certain rhythm to subjects, and you have to be on the rhythm. Sort of on the cusp. And just the importance of timing and being at the right time.

He gave a talk and said, David Brooks, if you are in the audience, I want to give you a job.

VH: As a University of Chicago alum, what are your thoughts on the University’s recent actions to end safe spaces and trigger warnings?

DB: I am pretty proud of it. At Chicago, we are super intellectual, and we were always arguing. We would sit at bars late at night. My college experience was very different from the students I teach now. I sat at lunch for two and half hours each day and argued then for another two hours later. Nobody has that much time anymore. We just argued and argued. That’s what the place stood for. Since then, I’ve taught at Duke and Yale, but everyone is a little more polite. If they are about to disagree, they are always like, “I’m sorry to disagree, but..” There is always an apology first; now people are clamored down. It is just less of an open atmosphere. Even for me, I hold my office hours at a bar between 9:30 pm and 1:00 am in the morning. Those were some of the best things I did, because I gathered ten students at a time, bought one bottle of wine––it wasn’t drunken, but it was a casual atmosphere where we could talk and get to know each other. It’s a shame to lose the close connection and the big arguments, so what Chicago did was say, “No, there will be no safe space here.”

VH: Do you think Vanderbilt should follow the University of Chicago’s lead?

DB: I do. There are times when you get your feelings hurt. I’ve certainly had moments in my class . . . But you get through that stuff.

VH: You have spoken against protesting the national anthem at football games. What do you say to those that say the protests have succeeded in sparking the conversation about race and police brutality?

DB: Well, it has drawn attention. But has it promoted a solution? In my view, there are a lot of things that divide us and these days, there are relatively few things that join us, but the one thing that joins us is our common love of country. So having a shared basis that we are all on the same team seems to be important at this time. The great thing about America is that our team, our nation, is built on common ground, but also the idea of equality. So people like Martin Luther King and Frederick Douglas said that the problem with our country is that we aren’t living up to what’s written down in the Declaration.

These days, there are relatively few things that join us, but the one thing that joins us is our common love of country.

VH: Would it be possible to get back to a shared creed of patriotism given our political divide?

DB: We are so divided. I grew up in an immigrant home, so we were super patriotic because this is where our family had come to and made it. But now the number of people that think America is the greatest nation on Earth has dropped from like 70 percent to 50 percent in the last 10 years. It’s especially true with millennials. So I think that’s a loss. I think the best thing we can do is to have an election that people should be impressed by. People have faith in their institutions when they see them working, and they don’t see Washington D.C. working.

VH: You have called some voters “disposed.” What do you think is driving that?

DB: I think the big thing is social isolation. If you look at the number of people that say the people around me are not to be trusted, it used to be that half of Americans thought people could be trusted. Now it’s like 30 percent, and among millennials, it’s 19 percent. Also, how many friends you have. It used to be the typical person had five or six. Now the typical answer is three and the number of people who say I have nobody has risen from ten percent to twenty-five percent. As I have traveled around the country the last seven or eight months, I’ve seen so many people falling through the cracks. They are turning to opiates or other drugs. Suicide rates are spiking up. So for me, the big repair, and the challenge for your generation, is to repair the social fragment. That has to be the foundation. Washington is polarized and dysfunctional, but I think it’s because the country is, so we have to repair the country.

Washington is polarized and dysfunctional, but I think it’s because the country is, so we have to repair the country.

VH: You wrote a piece about party realignment. What does the Republican party need to do to realign itself?

DB: It’s in parallel, because the Republican party is doing well with every shrinking demographic that there is. So if the future of the electorate is old white guys in Florida, they’d be great. That’s not the future of the country, and I am afraid that the party will become the party for the less educated people that are losing in the new economy, and the Democratic party is going to become the party of college educated people that are winning in the new economy. Then our politics will align with that class division. That would be ugly, and that is where we are heading. Clinton is doing really well with college educated people. Trump is doing well with high school educated white people. We haven’t seen that big of a difference in previous elections where education makes that big of a difference.

DB: Trump does not have beliefs. He has a mental condition. I don’t think the man can control his attention, except for the subject of himself. So, put aside the subject of whatever he believes, though, I’m not sure he believes anything. But he would just be chaos on stilts. I do not think he would function sitting in that office. I’ve covered four or five presidents, and there is a lot of really hard decision making, not flying by the seat of your pants. I can’t imagine him doing that job. I think there would be chaos and scandal.

VH: You have contrasted Donald Trump with President Obama, saying that you will miss him. What about President Obama do you think is missing from the discourse this election cycle?

DB: President Obama has an immense amount of personal integrity. He and his wife have conducted themselves fantastically, and their administration has been scandal-free in an era of distrust. Imagine if we had a bunch of scandals out of the White House at this time? It really would have been bad. But he is a man of honesty and integrity. There is also his ability to see the other side. He had belief, which was probably naive, that he could persuade anyone of anything. This was especially true with me. I would write a column that was critical of him and he would say, “David I want you to come into the Oval Office, I want to tell you the truth about this.” He has a belief that he can win people over.

VH: As a writer, what do you think the future of journalism is in the era of Twitter and short news cycles?

DB: Now there are two sorts of journalists. There are sprinters who are on Twitter producing a lot fast. Then there are marathon runners who can take all the bits of data out there and write a big conceptual piece and say “Here’s how it all fits together.” At my paper, we find a lot of people that can be sprinters, but it’s very hard to find people who can be both. So I think it’s a great time to be a journalist. The bad part of journalism is the competition for eyeballs. Young journalists are always super aware of page views and are writing to get hits. I think that’s a temptation.