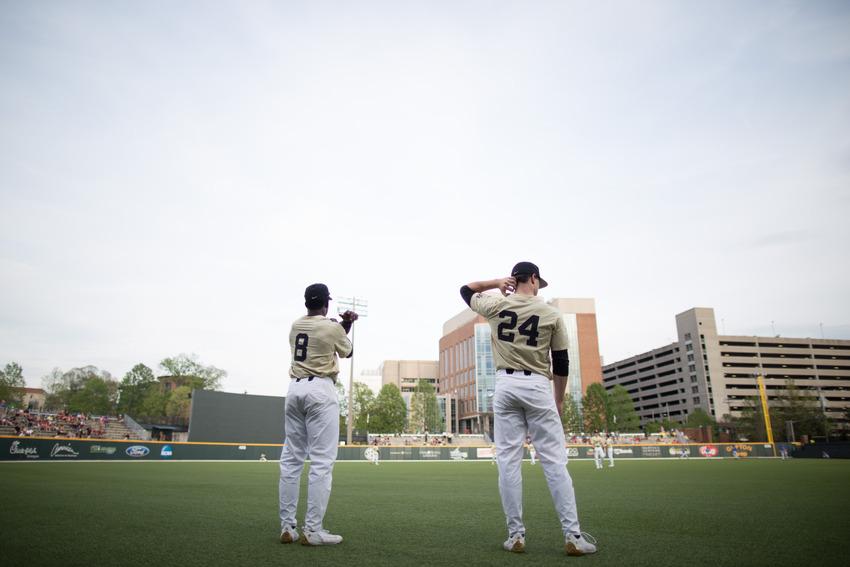 Reed Hayes (24) and Alonzo Jones (8) warming up for a tough series matchup in April. (Ziyi Liu)

October is always a big month for baseball.  Well, at least for Major League Baseball it is.  As far as college baseball is concerned, the season is still months away, but that’s not stopping Vanderbilt from making a splash.

The Commodores finally unveiled their new $12 million baseball facility this week, and if the first impression is any indication, it looks like money well spent.  The facility includes brand new batting and pitching cages with an expansive cage area.  A hydration station and a workout room sit above the cages, and open a door into the left field warning track.  The building also holds a training room and a large weight room packed with equipment, in addition to a recruiting war room that is sure to be the birthplace of many top recruiting classes to come.

New hydration/refuel station for players and a workout room above the cages (feat. a curious @AdamSparks) pic.twitter.com/XCsrU4tuiF

Even manager Tim Corbin didn’t expect the grandiose facilities to which his team now has access.

“It wasn’t meant to be the most luxurious building nor have everything,” said Corbin.  “More than anything, the idea was just to create a home, and I say a home from the vantage point of what a teenager or a person has inside their home that allows them to go through a day with harmony and as few hiccups as possible.”

The Vanderbilt baseball program has come a long way under the Corbin regime, and the new facilities were a reward that was a long time coming.

“I wouldn’t have known how to envision it really,” Corbin said of the prospect of a new facility 15 years ago.  “We were underneath the football stadium and using the visitor’s locker room, which was fine.  It’s really all we knew.  We had one batting cage and we didn’t have a pitching lab, so we really have been fortunate to build through the years and add on to the developmental facilities for the players, and looking back on it, it’s been great and I’m very thankful for it.  I don’t take it for granted and neither do the players.”

Corbin’s personal reward is an office that sits literally inside the left field wall, high up and overlooking the entirety of Hawkins Field.

Coach Corbin's (quite nice) office features a door to a catwalk overlooking the field pic.twitter.com/3iyuEYaisP

“I’m not deserving of space like that, said Corbin of his office.  “I look at it and it’s beautiful.  It’s beyond my comprehension.”

Vanderbilt’s manager has already had alumni poking their heads in the door, marveling at Corbin’s office and the facilities as a whole.  According to Corbin, they have nobody to thank for it but themselves.

The new alumni locker room at the baseball facility. Expecting these lockers to be filled up once the professional season fully wraps up. pic.twitter.com/jSTkmw0MqJ

“They built it.  They’re the ones who put this all together.  It was their achievements, their work habits that led to their successes, that led to someone emotionally saying, let’s do this.”

While Corbin stresses the busyness of the fall, he welcomes his former players back to the locker room in the offseason with open arms.  This season, they’ll be greeted by a pro locker room, commemorating the contributions that current major leaguers who can call Vanderbilt home have made to this program.  Pictures of these players line the walls of the facility’s new player classroom as well, headlined by a David Price quote that reads:

“Vanderbilt changed my life because I was able to grow mentally…”

Price famously donated $2.5 million to the program’s pursuit of a state-of-the-art facility, so the tribute to him seems only fitting

Corbin believes that the pro locker room and the ability to interact with the alumni provide unique insight and a drive to pursue a career like theirs.

“I know it has an effect on the kids that play here,” he says.  “I do think that they all see themselves playing beyond this level at some point and rightfully so.”

The unveiling of the facility comes just in time for Vanderbilt’s annual Black and Gold Series, a three-game intersquad series that both showcases the team’s talent and also gives them some practical in-game experience.

Vanderbilt still fosters the same expectation of success that has elevated this program to the upper echelon of the college baseball world, but this year it will have to be done with many new faces across the board.  The Commodores will have big shoes to fill, as the departures of Kyle Wright, Jeren Kendall, Will Toffey, and Jason Delay to the majors leaves a lot of production to be made up for.  Fortunately for Corbin, Vanderbilt is once again home to to the nation’s top recruiting class, and this roster features a whopping 17 freshmen, many of which are bound to make a big impact in this upcoming season.

“As freshmen, they sometimes don’t act that way,” said Corbin, who appeared impressed with the production of his younger players during the fall.  “They’ve all been pretty good and maybe ahead in my eyes of where I thought they could be at this point.”

Beyond the freshmen, some of Vanderbilt’s stars from last season will return to the field in the Black and Gold Series, looking to build on last season’s success.

One of those players is Julian Infante, Vanderbilt’s first baseman who finished last season hitting .315, clubbing 11 homeruns and knocking in 66 RBI in the process.  Infante recognizes that this team has a lot more to make up for than just on-field production.

“We talk about leadership and leadership is kind of a term that’s thrown around a lot,” said Infante of this team’s growth.  “All the older guys on this team are leaders.”

Corbin touched on a few more guys whose improvements will be vital this upcoming season.

“I look at guys like [Zach] King and [Jackson] Gillis and yeah I see advancements in them.  They haven’t pitched a ton but the times they’ve pitched I think, wow that’s 12 months better.”

King and Gillis figure to get a chance this upcoming series to show their worth on the mound, as will the rest of this young roster that has a lot to prove and even more to live up to. Vanderbilt will take the field for the Black and Gold Series starting tomorrow at 2:00 P.M.